While 2016 is almost at its end, it is time to examine what macro trends lie ahead for financial markets in 2017. Examining the likely scenarios is extremely helpful for assessing new investment opportunities, seeing where, how and when is best to start your business venture, or how to expand your investment portfolio - so listen up!

Global investors must decide where to invest their money. The choice will depend on the prospect of the country. Obviously, investors will aim to invest their savings in countries that offer them the best chance to make money. Usually, it is easier to make money in a growing economy. The reason behind that is the following: in such a positive environment, companies are probably willing to sell more goods and/or services and their profits are more likely to increase because they feel confident to satisfy their supply, matching demand.

Much of the story, indeed, is driven from consumer confidence. That is why it is important to repeatedly check this figure (officially released by the OECD for Europe or the Fed for US). Of course, investors move investments from countries that tend to perform worse into countries that are likely to do well. Therefore, it is essential to understand beforehand where opportunities can be exploited (in order to gain competitive advantage) before they become extinguished.

In a nutshell, as the CIO of the greatest hedge fund in the world, Bridgewater, argued that the global economy is at the beginning of a regime change characterized by:

In this brief guide, we will present some key facts to detail what to expect in 2017.

The main risk sources needed to be considered when investing in a foreign country can be divided in two categories:

On the one hand economic risk is the country's ability to pay back its debts, and on the other one, political risk sometimes coincides to the willingness of a country to repay debts or maintain a hospitable climate for outside investment. It must be noted that, even if a country's economy is growing fast (for instance some emerging economies), if the political climate is unfriendly (or it is expected to soon become unfriendly) to outside investors, the country may not be a good candidate for starting a business in. With this in mind, let’s have a look at which countries seem the most fit for investment moving into 2017.

In 2016, the level of indebtedness (in % GDP) reached historically high levels, with special preponderance in countries with developed economies. In the upcoming year, those economies are expected to remain hostages of indebtedness and moderate growth. 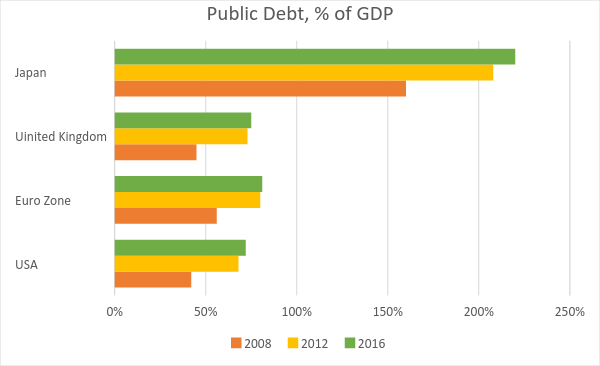 It seems that developed economies will reflect a moderate recovery trend of economic growth in 2017, although maintaining a significant output gap with respect to previous decades. In this scenario, it is worth noting that launching a stable and flat start-up, which cannot be innovated or adapted to unexpected negative contingencies, is not advised. It may be riskier and harder to managed than previously expected.

For this reason, it is rather recommended to create and develop a fresh and smooth business, such as one in the tech industry. For example, developing innovative apps or “smart” tools connected with devices and useful for everyday routine in your house can be successful ideas in this context. If planned and proposed well to the market, launching a technological business will result to be the fastest and easiest way to reach success. This is due to the fact that, tech businesses can count on low, or even zero, fixed costs. The only source of “cost” instead is in human capital, that is coming up with a “great” idea, and putting in practice the idea. Of course, it must be captivating and feasible to develop at the same time.

Companies in this sector are used to yielding significant and sustained growth every year. That is the main reason why investors have a strong propensity for adding stocks of this sector into their portfolio of securities. You can learn more about how to start an App business here.